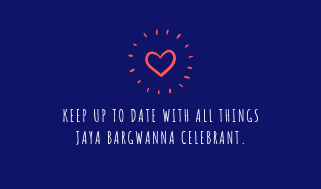 THIS LIL CELEBRANT SPILLS THE BEANS.

How did you first meet?

Matt and I met at the field of dreams (aka Lydon oval). At the time, my younger brother Raj, was playing in the under 19s team. Matt was one of the scary first grade boys. Middle of winter, dressed in a short dress, I was freezing my butt off while watching Raj play. A cute guy came over, offered me a jacket (which I graciously accepted) and then walked away. I later found out that it was a toss up between offering me that jacket, or the ‘stripper blanket’ as a laugh for the boys. If he chose the blanket, I don’t think I’d be filling this out.

Was it LOVE at first site? - Or did someone need a little persuasion?

So far from it! I mean, I thought he was cute – but he didn’t even say two peeps to me. For about 6 months there was the occasional ‘Hi’, ‘Bye’ or ‘been surfin’ lately?’ but that’s it. Then, fast forward another 6 months, there was a cheeky ‘add friend on fb’, then, a few months later we started bumping into each other at different pubs and our chats evolved to more than just ‘hi and bye’. Slow and steady wins the race, right?

What did you do for your FIRST DATE?

I don’t really know when things went from being pals to a first date. The first time we hung out, we went and got a coffee and watched Surfest. It was pissing down rain and I nearly bailed, but my mum convinced me to go and boy am I glad I did. From there, we caught up for a stroll along the beach (not sunset, don’t worry) and watched Surfest again. A huge storm came over so I offered to drive Matt back to his car, we sat there for ages, talking about anything and everything. Then, just like that, he slapped me on the shoulder, said ‘See ya mate’ and got out of the car. Friendzoned.

One of our first date-dates was at New Shanghai. I have no idea what I ordered, but Matt got crab. He had only ever had soft shell crab before so had no clue what he was doing. Anyway, long story short, he ate a big chunk of the shell, and swallowed it, because he was trying to impress. Unfortunately for him, his mate told me anyway.

Where was your FIRST SMOOCH?

On the front step of my grandmother’s house, where I was living at the time. I was out with my friends, and Matt with his. Yet, all of a sudden, his mates had all gone home and he was there alone. I was ready to head home and he asked if he could catch a cab with me and then get his mum to pick him up from my place. I guess you could say we’re still waiting for his mum to come and get him.

A couple of weeks before we started hanging out, I started my pharmacy degree and I remember saying to some friends – I am definitely going to stay single, I’m way too busy for someone at the moment. Well, then enters Matt. From our first hang I knew that I liked his company. He was an instant best friend. But, there was so much more to him. There was no single ah-huh moment for me. I just couldn’t get enough of his company and I still can’t.

Matt had these incredible plans to do it while we were surfing in Coolangatta. But, for the first time in the dozens that we had been up there, it was 4ft and there was no romantic mal riding to be done. So, he went for a spur of the moment alternative. Let’s not go into detail on this one. It was very ‘Matt’ and I loved it.

Spill on YOUR LOVE STORY.

Nearly seven years in the making. In this time, we have done so much together. Here’s a couple of highlights; graduated and got my first real job, moved in together, moved house, travelled a shit-load, quit our jobs and travelled the world, new jobs, got married, had the most beautiful daughter with another one on the way and we’ve both got plenty of premature grey hairs (him, more than me – but when we started dating neither of us had any!). But the most remarkable thing, in that time; our love has only gotten bigger and better.

What do you LOVE most about your partner?

How do I choose just one thing? He’s my biggest support and my best pal. He can make me laugh even when I’m furious (but don’t tell him that).

What's your partner's most annoying habit? (only one - no lists please hehe).

He steals all the blankets. All the time.

What would your partner say is YOUR WORST habit?

If he has a pimple or a blackhead, I will find it and I will pop it. I even have a popping face and sometimes make sound effects.

What's your partner's BEST PHYSICAL feature? (ok, you can have a list here)

Have you seen his eyes? And that smile. And the way his smile lights up his whole face, and his eyes. He’s pretty easy on the eyes.

What are your pet names for each other?

99% of the time I’ll call him Bargy (but so do lots of people) – then, there’s Barget, Jamon, Bargy bear, Honey, Bunny, Booface, Honey Bunny Booface or whatever comes to mind at the time.

Do you have a FUNNY story I can share?

When we first started dating, way back when, we tried to keep it a secret because Matt played soccer with my brother and we wanted to be discreet just in case we didn’t like each other all that much. After a few months, we got spotted leaving a pub together and rumours started circulating. But, once it came out that we had been dating for a while nobody gave my brother a hard time. I guess that’s not really a ‘haha’ funny story, more of a wow, that’s kind of strange/funny story to think back on.

Describe your LOVER in three words.

Describe YOURSELF in three words.

Describe your RELATIONSHIP in three words.

How do you feel MARRIAGE will change your relationship?

We’ve been married for nearly three years now (time flies!) but at the time, I was just so damn excited to be sharing the same last name. I had always felt the commitment, but marriage felt like a step towards becoming a grown up. Spoiler alert - totally don’t feel like a grown up, since being married.

What are your favourite things to do together?

Before we had our little one, we bought a van – created a little home on wheels and travelled up and down the coast surfing, camping and having a good ol’ time. We love surfing, playing soccer (up the thistles!) and if someone was to stalk us, we consistently frequent the same watering holes.

Since our baby girl Mali, we love our morning walks, coffee dates, hanging at the beach and family adventure dates.

Where was your first / best HOLIDAY together?

Our first holiday was to Coolongatta, and together we’ve been there upwards of twenty times since. We’ve surfed in the Philippines, watched Barcelona play in Barcelona, Hiked through Hawaii on our honeymoon and sipped cocktails in Melbourne. But, our best holiday (yet) was in 2016 when we travelled around Europe for nearly four months. We started out in Greece and Croatia – sunning ourselves and drinking way too much, followed by 6 weeks driving through Italy, France, Spain and Portugal. We then spent time surfing in Hossegor before making way over to Iceland. We spent 101 days living in each others pockets and didn’t go a single day sober. It was one of the best time of our lives.

Do you have seedlings? - tell me ALL about them.

We have a crazy, energetic and super-sweet firecracker of a daughter – Mali. She is 15 months, going on 13. We have so much fun as a family and our days are spent at the beach, drinking copious amounts of caffeine (because what’s sleep) and having dance-offs around the house. We are expecting our second Bargwanna junior sometime around March/April (aka peak wedding season) this year.

I love a good gin and tonic. Or a dry martini – that comes with an olive garnish, so that’s a snack, right? But, I guess you could throw in a cheese plate and that would do quite nicely.

I actually don’t enjoy movies. I have the attention span of a small child. On the rare occasion, you’ll catch me watching a sit-com or tv show – but it’s generally limited to one episode, maybe two – but only if they’re short.

It’s impossible to pick just one. The morning of our wedding was pretty special. We spent the night before, at home, just the two of us (and champagne). In the morning we headed to the beach – we were planning on surfing, but I hurt my neck in the surf the day before so thought a swim was a good option instead. I loved the anticipation that we were about to get married.

Then, of course, the first moment we held our daughter together. There’s no words for that kind of thing.

I’m a hopeless romantic (which is why I’m totally suited in indulging in other people’s love stories) and Matt is about as cool as they come. He’s the salt to my pepper and together we have one hell of a time. Oh, also, I could count the number of fights we’ve had on one hand.

VOWS TO WOW YOUR LOVER

HAVE YOU THOUGHT ABOUT A MICROWEDDING?

MY VOWS TO YOU.

FIVE TIPS TO HAVE A KICK-ASS WEDDING

1. Your wedding, your rules. Get married however the hell you want (I'll just make sure it's legit). Pictured - my (then - now; current) very-soon-to-be hubby and I, about to be walked down the aisle together by our nearest and dearest. Who says you have to follow tradition.

2. You can get married in front of two people, two thousand people, or somewhere in between. The choice is YOURs.

3. Every LOVE story is beautiful, unique and deserves to be celebrated. Love IS love, baby!

4. Your wedding ceremony can be individually crafted, just for you - or, you can choose to have 'no-nonsense-nuptials' and be hitched in a heartbeat. Both are beautiful.

5. You only every marry your 'HAPPILY EVER AFTER' once, so make it bloody perfect.

Now, read all the words in CAPITAL LETTERS. Tell me you didn't smile. Ready to get married? I know a celebrant

Ten Tips for a Memorable Ceremony (Part One)